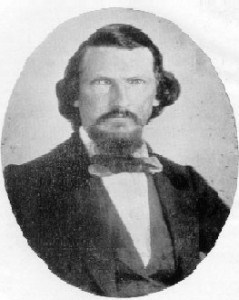 Major John Gee was arrested and tried for war crimes. Accused of intentionally abusing prisoners at Salisbury, Gee escaped the fate of Andersonville warden John Wirz and was exonerated.

Immediately after the war ended issues of blame for the abominable prison situation dominated Salisbury’s memory. Radical Republicans used the horrors of dead Union prisoners to argue for land redistribution and military reconstruction. Former Salisbury commandant Major John Gee was arrested after the war. Gee was one of two wardens tried by the United States government for their role in Confederate prisons. The other, John Wirz, ran the nationally infamous Andersonville prison in Georgia. Tried in Raleigh, Gee was charged with abuse of prisoners and gross negligence.[1] Gee and Wirz’s trials were part of an indictment on the Confederate prison system. Describing Andersonville and Wirz the prosecution stated that “it was the intrinsic wickedness of a few desperate leaders, seconded by mercenary and heartless monsters, of whom the individuals, of whom the prisoner before you is a fair type.”[2] Both men were convenient scapegoats since few in Congress believed that putting men like Jefferson Davis or any of his cabinet was feasible. Placing the former Confederate President on trial would only create greater animosity, something no US leaders wanted. No Union wardens were ever charged with anything despite the often equal rates of death of Confederate prisoners. Wirz was executed for his role in Andersonville, “there are crimes against God and man which ought not to be forgotten, and these for which Wirz suffered are all of them,”[3] reported Harper’s Weekly. However, Gee was acquitted thanks to his efforts to keep the prisoners alive. The defense proved that Gee went to great efforts to provide enough food for the inmates.